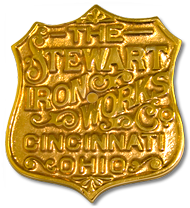 When you want to create a timeless setting, partnering with Stewart Iron Works is a given. Our team of designers, architects and engineers are the industry experts for your wrought iron and architectural metal needs.

Use our expertise to simplify what can be an arduous process. Building code requirements? Metallurgical compatibility? Historic design integrity? We’ve got it covered.

Stewart’s Project Managers work closely with you, your contractor, and your client throughout your project journey. We’re there for design, modifications, and manufacturing. Our work isn’t done until the installed product meets your—and your client’s—standards of satisfaction.

In 1862 Richard Clayborne Stewart Sr. opened the Stewart Iron Fence Company in Covington, Kentucky. Within four years the company grew to more 150 employees—an auspicious opening for one of Kentucky’s finest companies. By the turn of the century, Stewart Iron was considered the largest ornamental iron furniture manufacturer in the US. But that wasn’t all. They were also the largest ornamental fence company in the world, employing more than 700 workers. The company began to diversify. In 1902, the business incorporated under three separate names: The Stewart Structural and Iron Bridge Company, The Stewart Iron Fence Works, and The Stewart Jail Works.

As their reputation grew, so did the prestige of the projects they were awarded. Stewart Iron created all of the benches and site amenities for New York City’s Central Park, the light fixtures in the U.S. Capitol Building, the fencing and gates surrounding the Panama Canal, and the jail cells for such notorious prison as Alcatraz, Sing-Sing, and Leavenworth.

The Stewart family also expanded its business by marrying into other prominent manufacturing families such as Sanders Monuments and Firestone Tires. As a result, Stewart cornered the market on cemetery fencing across America. They also merged with US Motor Trucks and ultimately manufactured all of the heavy duty trucks used by the US Army during WWI.

Then, the Great Depression hit. Fence sales slowed and Stewart sold its interests in US Motor Trucks. They concentrated on its jail division, a booming industry during the years of gangsters and prohibition. Coincidentally, the company also began manufacturing the housings for Tommy Guns around this time.

With the onset of WWII, Stewart again contributed to the war effort by manufacturing tank armor and portable Bailey bridges. They were limited in their ability to land government contracts due a predominantly German-speaking workforce and US regulations regarding German-American citizens. This limit of opportunity left Stewart unable to invest in new equipment for mass production. This led to a severe decline in fence sales after the war.

During the 50s and 60s, a pivot was necessary. Stewart increased its footprint in the chain link fence market. This paid off when Stewart landed a contract to line the new US super highway system with coast to coast fencing.

A new era of company management began in the 1960s when the remaining Stewart heiress married the factory foreman. Stewart continued to focus on jail cell manufacturing up until the 1980s which introduced the development of electronic security systems.

By the end of the century, Stewart Iron Works once again thrived. There was a renewed emphasis on traditional craftsmanship and design and true wrought iron had become popular again—hand-forging in particular. Competition had not maintained the skills and equipment necessary for this artistry. Our reputation revived as a leader in ornamental metal work and new opportunities arose across many markets and industries.

In 2005, a group of investors purchased Stewart Iron Works. Under their guidance, production expanded beyond traditional wrought iron fencing.  The company added a range of steel, aluminum, bronze, glass, and stainless steel products that continues to today.

In 2019, the Huseman Group acquired Stewart Iron Works. We are excited to write the next chapters in the company’s rich history. We feel an immense stewardship of its great legacy. Stewart Iron Works is once again recognized as a leader in the wrought iron and architectural metal industry. We continue to build quality, handmade American products for our nation’s finest landmarks, residences, parks, and attractions.

As a proud Huseman Group company, our promise is to continue to deliver outstanding quality and service by completing complex projects quickly and accurately. We will champion the Stewart Iron Works name and products for present and future generations to experience and enjoy.